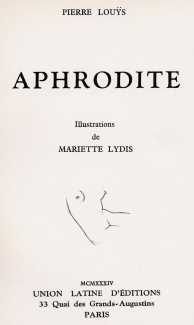 In 1934 the Paris publisher Union Latine d’Éditions commissioned several well-known illustrators to produce artwork for a new seven-volume boxed collection of the major works of Pierre Louÿs. Mariette Lydis was chosen as the illustrator for two of the volumes, La femme et le pantin (Woman and Puppet), and his best-known novel, Aphrodite: mœurs antiques (Aphrodite: Ancient Morals), the 1896 work that brought Pierre Louÿs to wide public attention. It tells the story of Chrysis, a courtesan, and the sculptor Démétrios, and is the classic theme of spurned love which turns into obsession and punishment, with the underlying message of the limits of mortality. Louÿs originally intended his novel to be published in a limited edition for his friends, but a glowing review by François Coppée in the Mercure de France, helped to no small extent by the libertine scenes scattered throughout the book, turned Aphrodite into a bestseller. By the time the 1934 edition appeared, Aphrodite had sold more than 300,000 copies.

The nine colour illustrations and monochrome tailpiece show Mariette Lydis entering her most confident period as an illustrator, and the high production quality of the Union Latine edition complements the assuredness of her images.