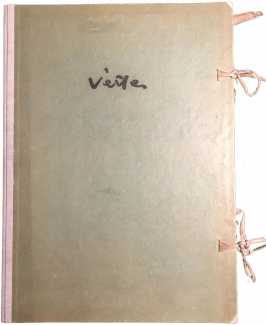 After he had left the Budapest Academy of Fine Arts in 1915, Marcel Vertès joined the Austria-Hungarian army, which of all the ‘Central Powers’ experienced the greatest percentage of casualties during World War 1, a suffering he recorded in a volume of drawings called Rajzai a Magyar Pkolból (Drawings from the Hungarian Hell), published in Vienna in 1921.

The twenty engravings of L’heure exquise (The Exquisite Hour) demonstrate how the young Vertès had already developed his own distinctive style and subject matter; they include a wide range of ‘transgressive’ subjects from scatology to bestiality, but also the gentle coupling of ‘Romance sans paroles’ and ‘Quelle heure est-il?’ Also included is one of his best-known engravings, ‘Pelleas et Melisande’ (is that what they are watching or what is on the couple’s minds?). Vertès’ sense of humour, which made him a favourite illustrator for the French satirical magazine Le rire during the 1920s, is to the fore in many of these images, including ‘Le deuil’ (‘Mourning’) and ‘Cello’.

Note that on these 1920 etchings he is still signing himself Vèrtes in the Hungarian style rather than the ‘French’ Vertès he became once established in Paris.

L’heure exquise was produced in a limited edition of 200 copies; complete portfolios are now rare as many sets were separated for framing.