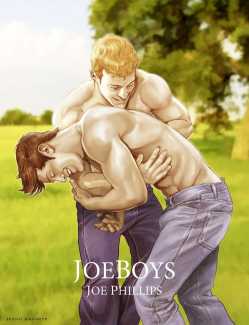 In 2015 Joe Phillips’ regular publisher, Bruno Gmünder, produced JoeBoys, a large-format overview of Joe’s favourite images from over a decade of gay-themed books and calendars, together with a number of previously-unpublished works. We have show only a handful here to give an idea of his recent work, colourful, realistic, and above all happy, carefree – and inevitably over-idealised.

An honest (and positive) assessment of Joe Phillips’ recent work is provided by Amazon reviewer Richard Brown, whose review is reproduced below.

There are a number of gay illustrators and artists who specialise in what the sleeve note of this book calls ‘the gay utopia’ in which beautiful sexy young men have a carefree time playing with their friends in a stress-free, benign and happy world that’s built around leisure. Joe Phillips is one of the most prominent of these artists. He’s well known for books such as Cali Boys and Boys will be Boys. This large handsome volume is a showcase of his work, past and present, a ‘comprehensive collection’. Joe says in a brief note: ‘I’ve collected some of my favourite images from Boys will be Boys calendars and over fifty new images in this book’. Among the mostly white young males are real people, celebrities and models, each getting their little bit of idealised immortality. The pictures are exuberant, colourful, inventive, romantic, sexy, touching, fun; they celebrate the happy and tender moments of life; and they are drawn with huge confidence, boldness and brio. All gay utopias are limited in what they will include, fantasy worlds where so much is excluded, and Phillips’s utopia is no exception.

Philips includes a couple of other elements: preparatory drawings for some of the pictures to indicate something about his working methods, and letters from some of his fans. The latter are all letters of praise and thanks and at first sight seem rather self-indulgent, as if Philips wants to pat himself on the back (he has no need to). But as you read them you begin to realise why they are there. They demonstrate that illustrations such as these can have a powerful beneficial effect on young gay men who are struggling with their sexuality and are moving towards coming out. It’s an element that others who have been out for a long time may forget about or not appreciate.