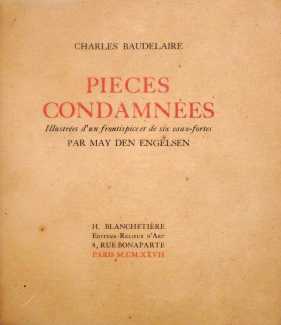 May den Engelsen’s second book commission was from Henri Émile Blanchetière, a well-known art shop owner of the period, for seven illustrations to accompany the six poems from Charles Baudelaire’s Fleurs du mal (The Flowers of Evil) which were censored and did not appear in the first two editions – published in 1857 and 1861 – of the book, together with a frontispiece. The censored poems (‘Lesbos’, ‘Femmes damnées (à la pâle clarté)’, ‘Le Léthé’, ‘À celle qui est trop gaie’, ‘Les bijoux’, and ‘Les métamorphoses du vampire’) appeared in print in 1866, but were officially banned (condamné) in France until the 1940s because of their lesbian and sado-erotic content. This made them particularly attractive for limited edition art publishers like Blanchetière.

Again May’s dark, stark style was perfect for the illustrations, which in some ways are similar to Auguste Rodin’s much more well-known illustrations for Fleurs du mal.

The edition was limited to one hundred numbered copies, and May also produced a set of watercolours to accompany the two most expensive de luxe copies.

We would very much like to include a complete set of high-resolution images for this portfolio, and to identify which illustration accompanies each poem. If you can help please let us know.