The poet and translator Edward Powys Mathers was quite a character; he wrote poetry, produced very good, though not scholarly, translations of Indian and Kashmiri love poems (The Garden of Bright Waters: One Hundred and Twenty Asiatic Love Poems in 1914 and Bilhana: Black Marigolds in 1919), and was an accomplished compiler of cryptic crosswords. 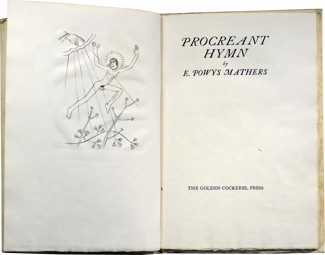 In 1926 he wrote Procreant Hymn, a semi-erotic celebration of the union of God and humankind, heaven and earth, and man and woman; his friend Robert Gibbings at The Golden Cockerel Press agreed to publish it in a limited edition, and asked Eric Gill to produce a set of engravings. In the book as published there are five images, known to be titled ‘God Sending’, ‘Earth Waiting’, ‘Earth Inviting’, ‘Dalliance’ and ‘Earth Receiving’, though the titles are not printed in the book. 175 numbered copies were printed for sale with a further 25 copies for presentation. There was also a notice, loosely inserted at the end of the book, which stated ‘Subscribers may be interested to know that three alternative designs have been engraved for this book and may be obtained separately from the artist’. As advertised in the notice, Gill made alternative plates, although there were actually four of these rather than three, with the addition of ‘Earth Wrestling’. They follow the composition of the published versions, but the male and female figures, already naked, are presented in a state of realistic arousal which would have been unexpected (and in many quarters unacceptable) at the time. Eric Gill also created a fifth additional engraving, entitled ‘Yahoo’, which was printed at the same time as Procreant Hymn; whether or not this was ever intended for inclusion is not known, but it is one of his best depictions of a woman’s body.

If Eric Gill was fascinated by sex, Powys Mathers was more than his equal. In his 1966 biography of Gill, Robert Speight quotes the poet David Jones reporting a visit with Gill to Powys Mathers’ London flat, at the time Procreant Hymn was in preparation. ‘The walls of Mathers’ Lincolns Inn Fields flat were plastered with pornographic postcards,’ wrote Jones, ‘which were too much even for Eric’s indulgent attitude towards pornography. Gill remarked to Jones that maybe if he were not a Catholic he might like them.’