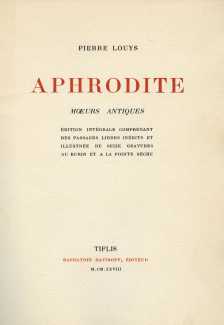 René Bonnel (1884–1975) is generally considered to be the most successful Paris-based publisher of quality erotica during the golden age of the genre between the two world wars. Together with his collaborator, the infamous entrepreneur and forger Pascal Pia, the erstwhile bookseller produced clandestine editions of around thirty important erotic titles between 1925 and 1935, including several Pierre Louÿs titles including Aphrodite, Trois filles de leur mère and Pybrac, Louis Aragon’s Le con d’Irène, and Georges Bataille’s L’histoire de l’oeil. Amazingly he managed never to be successfully prosecuted, one of his ruses being to give each of his editions imaginary publisher’s names and places of publication, including ‘Cologne: À la couronne des amours’; ‘Nice: La Ratapignata’; ‘Papeete: Les bibliophiles créoles’; and ‘Barcelone: Atarazanas’.

René Bonnel must have encountered Serge Czerefkov at almost the same time as the artist met his future wife, and it is intriguing to wonder whether public knowledge of the publication of this book with its powerful sexual imagery played any part in his sudden departure from Paris. The sixteen illustrations are sexually imaginative and explicit, quite unlike any other of Czerefkov’s known work. There is a clear affinity with some of the surrealist work of Toyen and Jindřich Štyrský; it may well have been this eastern European spirit which attracted Bonnel – and suggested Tiflis/Tbilisi as an appropriate publication location.

The three-volume Bonnel edition of Aphrodite was published in an edition of 166 copies.

A detailed bibliography of the books published by René Bonnel has been compiled by Patrick Kearney, which can be found on his Scissors & Paste website.