La Légende des sexes, poèmes hystériques et profanes (Legend of the Sexes: hysterical and secular poems) was French poet Edmond Haraucourt’s first published work, appearing in 1882 when he was 26 years old under the pseudonym Le Sire de Chambley. Like Baudelaire’s Les fleurs du mal, the subject matter which includes violent love and sexual allusion might seem rather tame today, but at the time it was subject to both censure and censorship. 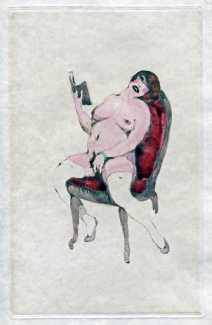 Frans de Geetere’s modest self-published edition of La Légende des sexes, with a hand-coloured frontispiece and fifteen engravings, was completed early in 1930 in an edition of 200 numbered copies. Most of the copies contained sixteen plates, but the most expensive thirty copies included an additional ten ‘planches refusée’ and one of the original drawings, all housed in an attractive white case or étui.

In these etchings Frans de Geetere demonstrates his trademark honesty and earthiness in depicting every sexual aspect of the human body, clearly based on personal experience and drawings from life.