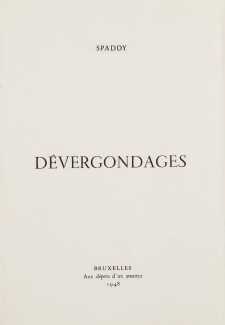 Irving and Polly Allen, Feodor Rojankovsky’s biographers, believe that his illustrations for Dévergondages were produced at the time the novel was first published, rather than soon before his illustrated version appeared in 1948; it is hard to tell. They have a maturity about them where much of the earlier work has a freer quality, but maybe they do date from before Rojan sailed for America in 1941. We shall never know.

Dévergondages was published in ‘Bruxelles’ (though actually Paris), aux dépens d’un amateur (at the expense of a collector). The numbered edition was limited to 250 copies, each with a loose set of sixteen coloured plates.