When asked about the importance of his drawings towards the end of his life, Auguste Rodin replied, ‘It’s very simple. My drawings are the key to my work.’ Rodin was a prolific draughtsman, producing around ten thousand drawings, over seven thousand of which are now in the Musée Rodin in Paris. His drawings were seldom used as studies or projects for a sculpture or monument, but were an essential element of his creative process, exploring line, form and pattern, especially in the human body. 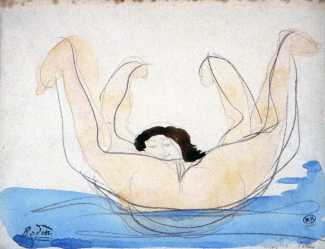 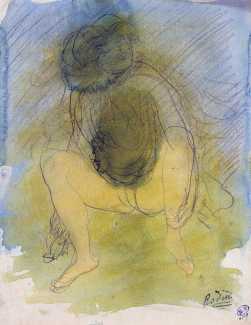 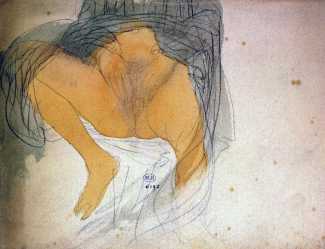 Some drawings lie at the far edge of eroticism and formalism. In one the immodest clarity of the genitals and spread thighs is emphasised by veiling the rest of the body with hatchings and a green wash. In another the strong contrast between the orange dress pulled up around the hips and the pale buttocks and legs, one form enclosing another, does not distract attention from the genitals, which are discreetly drawn in graphite but positioned in the centre of the image. The same is true of a third, where the woman’s presence is reduced to her genitals held open with both hands: the emphasis is triple – open dress, open legs, open genitals – but Rodin plays on the tension between the inverted forms of the thighs that spread upward and the dress that comes down over them, accentuating it by the contrast between grey and the colour of flesh.