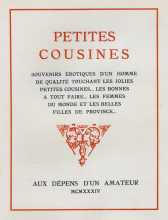 ‘Alice and I were in the small living room. It was hot. A nervous pretty little girl, it was as if she were in the grip of atmospheric electricity. She laughed strangely, lifted herself onto the couch, threw her legs up, and arranged them so as to show me her thighs and knickers, showing a little bare skin between the stockings and the lace of the knickers. The sight of the soft white thighs excited me prodigiously, and I watched her with an embarrassed sideways glance. Alice was teasing me. She looked at me with large, mischievous eyes and observed me with a smile. “Let’s play patient and doctor,” she said. She continued to direct the action just as she wished.’

And so this typical Pierre Mac Orlan tale of ‘innocent incest’, first published in 1919 under the pseudonym ‘Sadinet’, goes on to explore how the ‘little cousins’ learn about how intimacy and sexuality play out in the middle-class liberté of early twentieth-century French family life.

Léon Courbouleix’s brightly-coloured illustrations are among the most explicit he produced, a foretaste of the later Suzon drawings than his earlier, more literary portfolios.

The Courbouleix-illustrated Petites cousines was published ‘Aux dépens d’un amateur’ (at the expense of a collector) in a limited numbered edition of 175 copies. A later edition using inferior versions of the same images was published by Cotinaud in an edition of 275 copies.