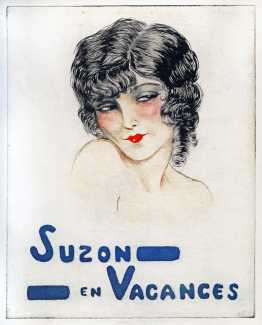 As publisher commissions for illustration started to dry up in the mid-1930s, Léon Courbouleix decided to create and illustrate stories of his own. He created the young protagonist ‘Suzon’, a name well-known to Parisian gentlemen as the Folies-Bergères barmaid (and almost certainly also a prostitute) who was the model for Manet’s famous 1881 painting of the Bar at the Folies-Bergère.

The first of Courbouleix’s Suzon volumes, published in 1935 under the imprint Aux dépens des amis de Cupidon (‘At the expense of the friends of Cupid’), was by far the best production, both for the quality of its illustrations and the spareness of its text. Suzon en vacances tells the story of Suzon visiting her friend Yvonne in the countryside one early August, and meeting Yvonne’s cousins Jeannette and Jean. It describes in poetic detail the sexual awakening they experience together, with the added assistance of the gardener Joseph.

Suzon en vacances was followed a year later by a sequel, Le mariage de Suzon, where everyone involved from bride and groom to priest and guests engage in an extended series of sexual experimentation. The drawing is more hurried and crude, and the overlong text tries too hard to shock. You can see Le mariage de Suzon here.

If you want to learn French sexual vocabulary, however, both the Suzon volumes will teach you all you ever need to know, from la queue to le godemiché.

Suzon en vacances was published in a limited numbered edition of 210 copies.