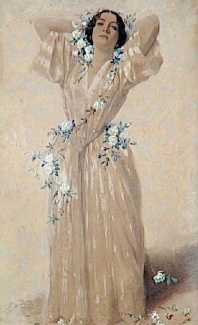 Josephine-Aglaé Sabatier, better known as Appolonie or ‘La présidente’, was quite a woman. The illegitimate daughter of a viscount and his laundress, she became the lover of affluent Belgian businessman Alfred Mosselman in 1838, and in the 1840s and 50s hosted one of Paris’s most coveted Sunday salons. For a short while lover to the poet Baudelaire, she quickly gathered a circle around her of many of the best-known writers, musicians and artists of the day, including Alexandre Dumas, Ernest Feydeau, Gustave Flaubert, Théophile Gautier, Edmond de Goncourt, Alfred de Musset, Ernest Meissonnier, Charles Jalabert, Gustave Ricard, Auguste Clesinger, and Hector Berlioz. Always her own woman, she never married or had children; in her fifties she became the lover of Sir Richard Wallace, heir to the wealthy art collector Richard Seymour-Conway, who gave her an annuity of £50,000 a year to continue in the style to which she had accustomed herself.

Gautier wrote the graphic Lettres à la présidente in the 1850s during a visit to Rome; its graphic descriptions of courtesans and their establishments amused both Appolonie and her admirers; circulating for many years in manuscript, the letters were first published in book form after she died in 1890.

Lafnet’s twelve illustrations to Lettres show him at the height of his skills, both technical and imaginative. Witty and full of detail, they capture the free spirit and experimentation of one of the most innovative and creative Paris salons of the mid-nineteenth century. 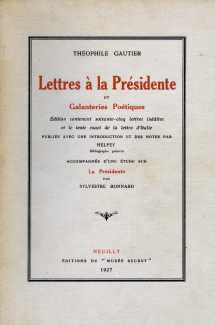 The edition of Lettres illustrated by Luc Lafnet was published in 1927 under Maurice Duflou’s imprint Éditions du Musée Secret; as well as the sixty-five letters it included an introduction by ‘Helpey’ (pseudonym of the poet Louis Perceau), and a commentary by Sylvestre Bonnard. It was published in a numbered limited edition of 450 copies.