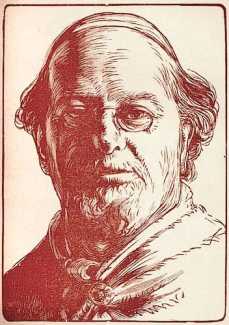 Remy de Gourmont (1858 –1915), French symbolist poet, novelist and influential critic, was widely read in his era, and was an important influence on such literary figures as Georges Bataille,  Ezra Pound and Havelock Ellis. Lettres d’un satyre (Letters of a satyr) was written towards the end of his life, in 1913, and in his trademark fluent and witty style it picks apart the follies of pre-first-world-war society.

Antiphilos is a satyr, a lustful woodland god who understands how important it is to be true to your desires. During an extended visit to the world of humans he tries hard to explain why this is so important, and in this witty series of letters Gourmont explores the strange social and sexual habits of human behaviour. 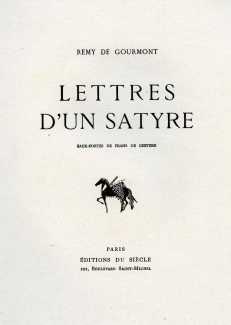 Lettres d’un satyre with de Geetere’s illustrations was published by Editions de Siécle in a limited numbered edition of 366 copies.

A good English translation of Lettres d’un satyre, translated by John Howard and with an introduction by Jack Lewis, was published under the title Mr Antiphilos, Satyr, in 1922 by the New York publisher Lieber & Lewis.