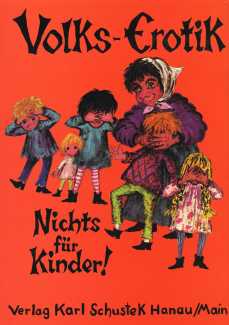 This collection of German bawdy rhymes, songs and stories was published by the Hanau am Main publisher Karl Schustek after Székely’s death, which meant that many of the illustrations were either completed or created by his friend, the Dutch cartoonist Jean Veenenbos (1932–2005). It is impossible to tell which artist drew which illustration, though the visual signature of each can be seen in the quickly-drawn, wittily-conceived drawings.

Volks-Erotik is subtitled Nichts für Kinder! (Not for Children!), though most of the rhymes are innocent enough. Some of the contents are rather witty, like this alphabetic poem, A–Z:

(Albert took Clara through a dark passage into a cellar, laid the girl down under the organ, pumped her, squeezed her, rammed her, stoppered her, fucked her well many times, till it was twilight.)