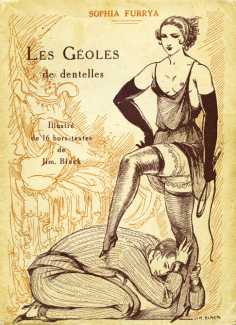 Paris in the 1930s was the place to obtain quality erotica, and many an English businessman visiting the city would pay a call to one of the small specialist bookshops offering such material. Top of the shopping list would be stories involving flagellation, ‘the English vice’, especially if they were illustrated. The offerings of Collection des Orties Blanches (White Nettle Collection) were perfect, with titles like Maisons de flagellation and Mrs Goodwhip – and Les geôles de dentelles (The Lacy Dungeons), written by Sophia Furrya (one of the many noms de plume of the prolific Liane Lauré) and illustrated by Luc Lafnet using his favourite pseudonym, Jim Black.

Liberal though Parisian publishing might have been, Les geôles de dentelles was banned by the Criminal Court of the Seine, and upheld by the French Court of Appeal, three times in the early 1950s. The reissue of 1958 was not challenged.