Le rideau levé, ou l’éducation de Laure (The Curtain Lifted, or the Education of Laura) is a classic sexual awakening fantasy, almost certainly written in 1786 by Honoré Gabriel Riqueti, the Count of Mirabeau (1749–91), though some sources attribute it to his contemporary the Marquis de Sentilly. Mirabeau was a free-thinking French nobleman who was involved in numerous scandals before the start of the French Revolution in 1789. The revolution established his reputation as a successful orator and champion of the people, favouring a liberal constitutional monarchy. 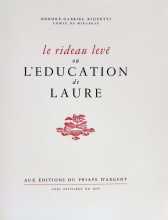 The Ballivet-illustrated edition of L’éducation de Laure was published by Les éditions du Priape d’Argent in a limited numbered edition of 223 copies.