During a period of intense artistic activity in the late 1920s, Courbouleix was fascinated by the brothel scene in the southern French port city of Marseille. He was commissioned by Fernand Mitton’s Art de l’intermédiaire du bibliophile to produce twelve illustrations for writer-publisher Noël Clément-Janin’s Le vieux port de Marseille: scènes vécues (The Old Port of Marseille: Scenes Observed), and rose to the occasion with some of his best and most keenly-observed studies.

The port brothel was an integral part of the life of interwar Marseilles, providing much more than mere sexual relief. The network of maisons closes operated as much as surrogate families as they did as commercial establishments, providing important support for both their clients and their workers. 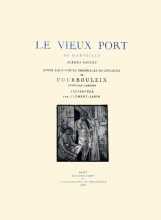