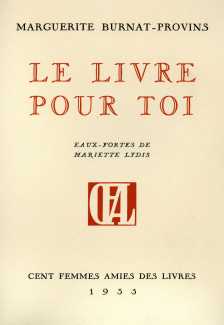 This is a rare volume, written, illustrated and published (though not actually printed) entirely by women.

Le livre pour toi (The Book for You) is the best-known work of poet and painter Marguerite Burnat-Provins, and is a collection of one hundred short prose poems composed in 1907 for her lover, the young engineer Paul de Kalbermatten. The fact that she was already married to the architect Adolphe Burnat was scandalous, even in France; that she wrote and published the poems to her lover even more so. Publication ended the marriage, and Marguerite and Paul spent several years travelling together in the Middle East and North Africa. Le livre pour toi is her most accomplished work, still considered one of the most beautiful love songs in French literature. In later life she retired to Grasse on the French Riviera, where she continued to write and paint, including a famous series of some three thousand drawings based on her dream life.

The illustrations are classic Lydis, matching the passion of the poems with an absorption in sensuality; interestingly they are her only real foray into closely-observed heterosexual intimacy.

The publisher of this 1935 illustrated edition is Cent femmes amies des livres (One Hundred Women Friends of Books), a group of women bibliophiles established in 1927 to produce each year an important volume concentrating on women writers and illustrators. The members were well-to-do women, mostly Parisian and mostly the wives of eminent men; the first honorary president was Madame Paul Deschanel, wife of the President of the Republic. Interestingly they nearly all used their husbands’ names (Mrs Edward Imbs, Mrs Achille Hauser) rather than their own, a practice Marguerite Burnat-Provins would not have approved of.

Over the years (the group was finally disbanded in 1967 after several years of non-publication), Cent femmes amies des livres produced several illustrated books, including this edition of Le livre pour toi illustrated by Mariette Lydis. As with their other productions, it was printed in a limited numbered edition of 130 copies, 100 for the membership and 30 for the author, illustrator, and other important people.