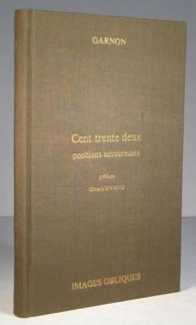 Just how many sex positions are there? The true answer is that there are as many as there are lovers times the abundance of their imaginations. The kama sutra traditionally teaches 69 variants, though the sex manuals count anything from six basics to 245 or more varieties.

In the Garnon version there are 132 (cent trente deux), explained by sexologist Gérard Zwang in his introduction to this volume as being something esoteric to do with pi. But it’s the illustrations that are much more interesting than the worthy introduction, and Gilbert Garnon’s drawings of the possibilities of coitus show just how adventurous it is possible to be, at least in the imagination.

The Garnon Cent trente deux positions amoureuses was published by La Vue/Editions Borderie; 33 copies included an original drawing, and ten were reserved for the ‘collaborators of the collection’.