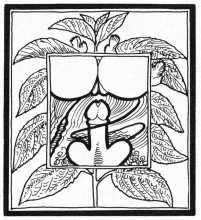 Gamiani, ou deux nuits d'excès (Gamiani, or Two Nights of Excess) was first published in 1833. Its authorship is anonymous, but it is believed to have been written by Alfred de Musset, and the eponymous lesbian heroine a portrait of his lover, George Sand.

The narrative follows a young man named Alcide observing the Countess Gamiani and a young girl named Fanny engaged in their lesbian bed. Having watched them, and provoked by their abandon, he reveals himself, joins them, and they spend the night alternately sharing their intimate histories and their bodies. The stories they tell include the rape of one in a monastery and the nearly fatal debauchment of another in a convent, as well as encounters with a number of animals including an ape and a donkey. 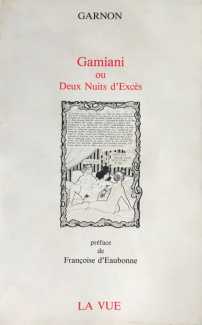 Gilbert Garnon’s comic strip (bande desinée) version of Gamiani has an introduction by French ecofeminist Françoise d’Eeaubonne, in which she describes Garnon’s work as ‘sinuous and earthy, with a black lyricism’. It is Garnon’s best work, extending to more than a hundred pages; here we show just a selection in which image take precedence over text.