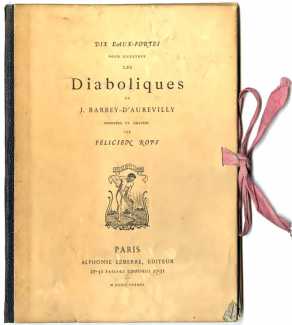 The success of the engravings for Les Diaboliques (The She-devils) is surprising given how little was known of Rops’ work at the time they were published. The many articles subsequently written by well-known authors of the time – Joris-Karl Huysmans, Octave Mirbeau, Jacques Pradelle, Joséphin Peladan, Octave Uzanne and Vittorio Pica among others – show both how favourably these engravings were received by those who knew of them, and why Rops quickly became so notorious.

Les Diaboliques is a collection of short stories written by Barbey d’Aurevilly, first published in 1874. Each story features a woman who commits an act of violence or revenge, and is considered d’Aurevilly's masterpiece. The deeds committed by the characters in the stories are induced not only by their extreme passion but also by their boredom. Some of the characters spend hours playing whist, while others take delight in wearing fine clothes. All of the female characters are strong and independent, and also very good at concealing their passions.

In fact only six of the Rops engravings illustrate d’Aurevilly's stories – The Crimson Curtain, The Most Beautiful Love of Don Juan, The Underbelly of a Whist Party, To Atheist Dinner Guests, Happiness in Crime, and Revenge of a Woman. The frontispiece of the Sphinx, possibly Rops’ best-known image, is intended to represent the whole phalanx of strong women, while the other colour image associated with this series, ‘Theft and Prostitution Rule the World’, appears as an endpaper in later editions. The final two monochrome images are two versions of ‘Postface: Woman and Madness Dominate the World’.

There has been some confusion about the dating of the original version of Les diaboliques; it is sometimes given as 1882, but in fact the Rops-illustrated version was almost certainly published by Lemerre in 1886.