Antoine Raymond Jean Gualbert Gabriel de Sartine, comte d’Alby (1729–1801) was a French statesman who served as Lieutenant General of Police of Paris (1759–74) during the reign of King Louis XV, and as Secretary of State for the Navy (1774–80) under Louis XVI.

As well as being a successful civil servant, Sartine was an educated man and an art lover; the books from his enormous library still appear at public sales and command high prices; they are distinguished by their superb leather bindings with the gold embossed coat of arms of three sardines. He was very fond of his wigs, and during his lifetime a type of wig was named after him.

Though the historical truth may well have been exaggerated, it is clear that one of the services provided by the Paris Chief of Police was a regular supply to the king of risqué tales collected during the course of police interrogations and proceedings, it is said to combat Louis XV’s perpetual regal boredom. However embellished such stories were, there is no doubt that they were documented and collected, and provide a living picture of aristocratic exploits in eighteenth-century Paris. Louis thus had a daily supply of anecdotes which allowed him to savour, without leaving his couch, the erotic pleasures of his subjects. 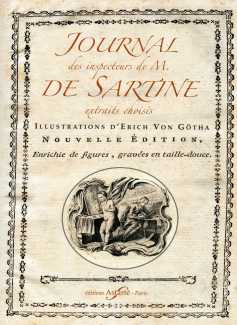 A small selection of this collection of anecdotes, illustrated in von Götha’s distinctive style, was published by Éditions Astarté in conjunction with an exhibition of the original artwork at Astarté’s gallery in Paris.