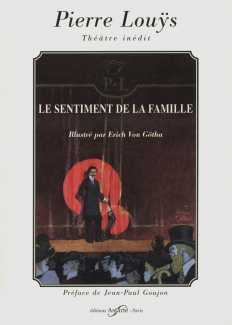 Yet this a drop in the ocean compared to the incredible amount of erotic manuscripts still unpublished; Le sentiment de la famille (A Sense of Family) is just one of many, a playscript involving a family of theatrical performers specialising in outlandish acts involving the audience in a wide range of sexual experiments. It also includes his trademark inter-family relationships include incest and sister-sister lesbianism. Pierre Louÿs wrote it when he was 21; it can be dated quite precisely through the existence of a similar manuscript belonging to a collection bearing the date 1891. At some point Louÿs decided to work on the 1891 manuscript and copied it out in another notebook, adding modifications. We shall never know why he did not finish it, but this is true of many of his manuscripts; his fertile imagination moved rapidly between projects and completion was often not his primary goal.

The commission from Astarté for twelve von Götha illustrations was what was probably a welcome reprieve from endless comic format work, and the artist rose to the occasion with what many consider to be some of his very best and most imaginative depictions of the transgressive theatrical world of fin-de-siècle Paris. Louÿs and von Götha are a most fortuitous pairing.

Éditions Astarté produced the von Götha edition of Le sentiment de la famille in a limited run of 1,500 copies. As well as the illustrations it includes a facsimile reproduction of Pierre Louÿs’ manuscript, and an introduction by Jean-Paul Goujon.