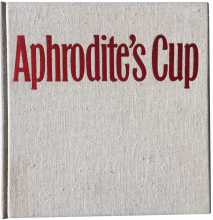 Aphrodite’s Cup was published in a limited numbered edition of 275 copies by the Honeysuckle Press of North Vancouver.