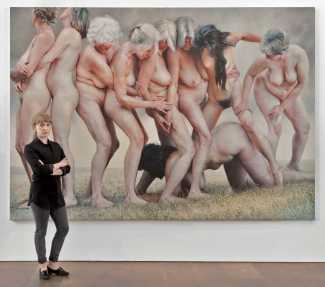 Not everyone rates Aleah Chapin’s uncompromising realism – art critic Brian Sewell called the painting which won the 2012 BP Award ‘a repellent and grotesque medical record’. That almost certainly tells us more about Brian Sewell than it does about the artist.

Fortunately other reviewers have a better understanding of her work. Daniel Maidman remarked on the subjects’ casual approach to their appearance: ‘Their nudity does not seem to be such a huge big deal to them – their shoulders and arms are relaxed, their chins are raised and their eyes hooded in their direct gaze at the viewer, suggesting that they are prepared to vigorously defend their position. Chapin paints badass naked older women whose age and wounds tell a story.’

Most of Chapin’s models are people she has know for many years, and she says of her work that ‘it examines my personal history through the people who have shaped it. On our bodies is left a map of our journey through life. The process of painting these women allowed me a glimpse of that journey and brought me into the present moment of our shared history.’

One aspect of her work, as you can see from the photograph of her with one of her paintings above, is that all her models are painted larger than life, making it even harder not to engage with the detail of real nakedness. For anyone who says they love older women’s bodies, these paintings offer an acid test of how deep that love goes …