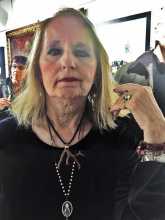 Le Pagelle (School Reports) is a series of artworks created by Titti Garelli in 2003 and 2004, and apart from a series of five ‘Gothic Queens’, which you can see here, they are the most explicitly sexual images she has created.

Here is the artist’s own explanation of the origins of the series: ‘The School Reports are the result of my reflections on sexuality in the generation of my mother and my grandmother, at a time when nobody talked about sex, and certainly never from a female perspective. The actual reports are real period documents, found in flea markets; they were so different from those that I received at the end of the school year, green-gray and always the same. These were different each year, with interesting layouts and colours – and included opinions and not just numbers. Of course they served the same function; the performance of the pupil in terms of duties and obligations, rules, obedience, reward and punishment. It was for this reason that my amended versions depict erotic scenes, often including spanking, set in an imaginary school with improbably undressed schoolgirls and strict teachers.’