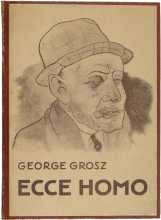 Ecce Homo is a vicious satire of post-war German life, with politicians, capitalists, prostitutes, mutilated veterans, beggars and drunks in various states of despair, lust, and rage. The German government banned it and Grosz was put on trial for public offence. While clearly influenced by the Cubist, Bauhaus, and Fauvist movements, in Ecce Homo Grosz’s raw, angry style is distinctly his own.

A complete edition of Ecce Homo, with an English-language introduction by Henry Miller, was published by Methuen in 1967.