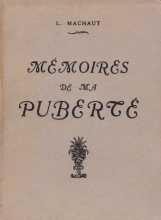 Mémoires de ma puberté (Memoirs of my Puberty) is one of a series of illustrated erotic titles published in the 1950s by the Toulouse-based publisher Francis Flores. The author is shown as ‘L. Machaut’, almost certainly Flores himself; the illustrator is the ubiquitous Anon. Flores’ output had hardly hit the shelves before being banned by the French government in 1960, which makes them quite rare collectors’ items. To make the most of his material, Flores sometimes published exactly the same books with different titles – Mémoires de ma puberté is sometimes seen with the title Suzanne écolière d’amore (Suzanne, Student of Love).

‘With a mechanical gesture he subjected his rod, already very nervous, to an up and down movement. No longer afraid, and seeing Suzanne with her head on the pillow so close, so naked, he launched his discharge into the lavender-scented sheets with a groan of happiness.’ Very 1950s!

Mémoires de ma puberté was published by Éditions du Levant in a limited edition of 750 copies. The illustrations were produced separately from the text, mounted on card with paper guards.