Another volume illustrated by Anon, this sought-after volume from Paris in the golden 1930s exhibits some interesting features, including two titles, two versions of the illustrations, and multiple authors. While the book itself appears to be entitled Ode au vagin, the outside and more ‘socially acceptable’ cover carries the less explicit title Ode à Venus.

In addition to the main text, this volume contains a note about the author signed by ‘Jean Tiretta’, a facsimile of the last page of the manuscript signed ‘Klau-Vizuq’, and notes about Hugues’ companion poem Ode à Priape, written by ‘Helpey’. We know that ‘Helpey’ is the author Louis Perceau, and it is likely that all the book’s additions are by him under different names. Perceau knew the publisher Maurice Duflou well, so Ode au vagin can be seen as a carefully thought-out collaboration. 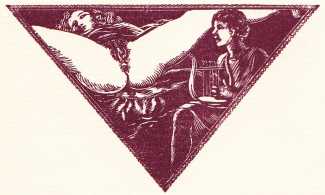 Two versions of the book are known, one with monotone illustrations, and a more expensive one (shown here) with hand-coloured ones. Though the identity of the illustrator is unknown, their quality and originality suggests experience in the genre, so names like Herouard and ‘Wighead’ are possible candidates.