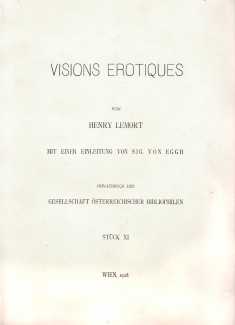 Though the acclaimed illustrations for H.G. Wells’ War of the Worlds took up most of his time and energy in 1905, Alvim Corrêa also continued to explore some of the themes of sex and death which he had been working on in his Boitsfort studio. As he came to terms with his tuberculosis, with a mixture of happy memory and impending endings, his fertile imagination brought together a set of twenty highly original engravings which neatly bridge the styles of his mentor Felicién Rops and his protegée Marcel Vertés.

He found a publisher in Vienna willing and able to produce the engravings in a limited edition portfolio, and chose a pseudonym to match his subject matter, ‘Henry Lemort’ (Henry the Dead). Each of the images repays close attention, as Corrêa put the whole of his remaining strength and imagination into this unique series of drawings.