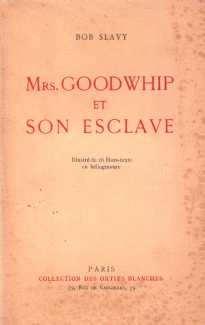 The title says it all, and was intended that way. When Jean Fort established his Collection des Orties Blanches (White Nettle Collection) in 1928 with La flagellation dite passionnelle (Passionate Flagellation), followed by a further seventy spanking and whipping titles, he both created and fulfilled a seemingly endless market for such material. At times in the early 1930s he found it hard to commission sufficient material, and was fortunate to secure the services of authors like Pierre Mac Orlan, who wrote for him both as  Pierre Dumarchey and under the pseudonym ‘Sadie Blackeyes’. It is quite possible, given the similarities in style, that ‘Bob Slavy’ (the ‘slave’ allusion is deliberate) is also Mac Orlan, though it has never been proven.

Mrs Goodwhip et son esclave (Mrs Goodwhip and Her Slave) is an international romp involving pirates and dominant women from Europe, Africa and Japan in order to offer the reader as much titillating detail as possible. Neither text nor illustrations are of a particularly high quality, but Mrs Goodwhip was one of Fort’s most successful titles, reissued by Dominique Leroy in 1976.

The 1932 Fort edition of Mrs Goodwhip was published in a numbered edition of 1000 copies.