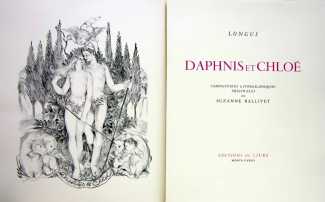 Set on the island of Lesbos during the second century, this is a remarkably modern tale, its main characters, the boy Daphnis and the girl Chloe learning the hard way about the rocky road from childhood innocence to adult relationship. Both children are left alone in the countryside at birth, along with tokens identifying who they are. A goatherd named Lamon discovers Daphnis, and a shepherd called Dryas finds Chloe; each decides to raise the child he finds as his own. Daphnis and Chloe grow up together, herding the flocks for their foster parents. They fall in love but, being naive, do not understand what is happening to them. Philetas, a wise old cowherd, explains to them what love is and tells them that the only cure is kissing. Shortly afterwards Lycaenion, a woman from the city, educates Daphnis in love-making, but Daphnis chooses not to test his newly-acquired skill on Chloe because Lycaenion tells Daphnis that Chloe will scream and lie bleeding. Meanwhile Chloe is courted by suitors, two of whom attempt with varying degrees of success to abduct her. After several more adventures Daphnis and Chloe are recognised by their birth parents, get married, and live happily ever after.

Again Suzanne Ballivet’s style is well-suited to this pastoral tale, and her attention to detail is apparent, especially in the backgrounds of the forty-six lithographs, which in the copy used for this website have been hand-coloured. Interestingly, she isn’t coy about including juvenile genitalia where appropriate.

The Éditions du Livre volume was produced in a slipcase in a limited edition of 950 numbered copies. Sixty were special editions, many of which were bound by their purchasers in expensive bindings; 890 were the ‘standard’ edition.