The Secret Art of Tom Poulton 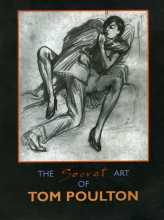 When the EPS started winding up in the mid 2000s, a new volume of Poulton drawings, again with an introduction by Jamie Maclean, was published by Taschen with the title The Secret Art of an English Gentleman. This rather misrepresents Tom Poulton, who certainly knew about the sex lives of the English establishment, but who was himself something of an unconventional outsider.