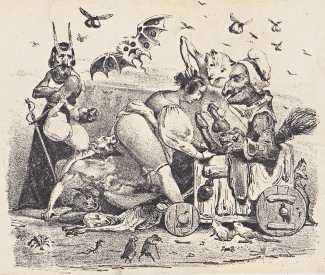 The first album of these etchings was entitled Les diables de lithographies (Devilish Lithographs). Co-published in Paris by Chez Aumont and in London by Charles Tilt, it contained eighty illustrations on twelve black and white numbered lithographed plates. On its publication, Les diables de lithographies was hugely popular, a sensational success such that demand for further ‘devilries’ was soon evident. Lepoittevin quickly followed with four further collections – Les diableries érotiques; Petits sujets des diableries; Bizarreries diaboliques; and Encore des diableries. It wasn’t long before other artists got in on the act, notably Aimé de Bayalos with his Diablotins and Michel Delaporte with Récréations diabolico-fantasmagoriques.

Shown here are the twelve original plates from Diableries érotiques, plus a further eight from his later collections. Though Lepoittevin’s prints sold in large numbers, very few have survived, and even fewer in complete collections. Interestingly there is no record of them ever having been subject to censorship. A facsimile edition of Diableries érotiques was published by Éditions de Manoir in 1971.