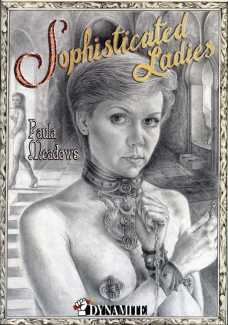 The magazine production quality was poor, and the printer managed to lose both originals and offset plates, so for many years Sophisticated Ladies virtually sank into oblivion. Then in 2000 the small Paris publisher Dynamite contacted Paula – the text in the 2002 reprint explains what happened next: ‘It was exasperating to think that this little gem of female pornography might remain unknown forever. Two years ago, slipping a few words about Paula Meadows into the contemporary art magazine artpress, I convinced myself that there was an injustice to be rectified. Information technology came to our rescue, and allowed a restoration which was impossible to envisage in the old days. The dirt was patiently cleaned from the scans, and the greys were recalibrated. Only plates 27 to 31 turned out to be unrecoverable, and luckily Paula had photocopies of these pages, for which she recreated the shading. The texts, which were originally very badly translated, have been rewritten. I am very glad indeed that these sophisticated ladies have been saved.’ 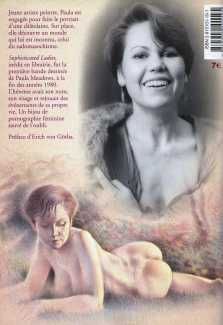 The autobiographical nature of Sophisticated Ladies, with Paula as herself taking a leading role, makes this a very special project. The plot is straightforward but neatly turned, and both artwork and narrative form a consistent and convincing whole. The text is in French, but words are almost unnecessary; as long as you have some idea of the meaning of ‘Quel beau cul!’ and ‘Mon dieu!’ you should be fine.

Here is what Erich von Götha writes in his introduction to the reprint: ‘I fell in love with Paula when I discovered her in her X-rated movies. I loved her pout and her expressions of surprise when confronted with new sexual situations. I wanted to experience this mysterious innocent debauchery. When I finally met Paula, I discovered that she was not just a porn star. As a child she had studied dance, and was a ballerina. As a young adult, she had played in roles for the BBC. I discovered that she was a true artist, with a personal vision and the skills to express it. She explored her sexuality with audacity and intelligence, and always with affection for the new friends she met on the way.

‘After using her talents to dance, play and paint, she turned to erotic comics, and I and many friends admired the ease with which she went from expression through the body to telling illustrated stories. Sophisticated Ladies, whom I consider to be her best comic book, is not limited to representing bodies, but also explores the complexity of desires. We discover women with a strong sexuality, described with a feminine sensitivity. There are scenes of violence and humour, extreme sexuality and sadomasochism, and Paula’s long acquaintance with fetish circles adds to the flavour of her point of view – it is that of an initiate. Many of her fans are sensitive to this: she knows what she describes, she is one of them.

‘At the request of one collector Paula made some drawings for Histoire d’O – every time I see them I regret not being the artist myself, and if she continued the project there is no doubt that her illustrated version of this classic text would be unsurpassable. Maybe one day an enlightened publisher will commission it.

‘Taking as a model her own dancer’s body, her perfect proportions and her delicious behind, Paula is often closer to painters than to comic book authors, who above all concentrate on the expression of faces. I must admit it, I am jealous of her body. My life would be so much easier if I saw such shapes in my mirror! I would draw so much faster! You’re in luck. Paula will tell you about the pleasures she has known. And in the other women of the story there is also a little bit of her, reliving the joys and pains of her life full of events, the life of one of the most exciting female artists of our time.’