The Naughtiest Girl at St Gertrude’s 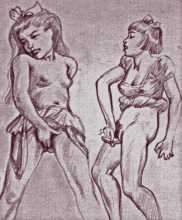 The story to go with the drawings is a fine romp. French teacher Nigel Claythorne takes up a new post at St Gertrude’s School for Girls, a noble pile set in the depths of the English countryside, with something of a reputation for liberal education. He leaves his young wife Violet for a while, as she is busy as a typist in the City of London (but it’s useful to know that she too had been a pupil at Gert’s, as had her sister Babs). Before long the girls are involving Nigel in their sexual explorations – the rest is all downhill.