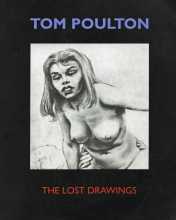 As Maclean explains, ‘This small treasure trove had been lost to the public for good. It was only with the publication of An Artists’s Secret Sketchbook that the owner remembered what he had secreted in a dusty storeroom all those years ago. These works were not his commission, nor did they really form part of his personal collection, rather they had been inherited from a collector friend as part of a large group of books and pictures.’

The Lost Drawings represent a cross section of Tom Poulton’s sexual interests, from almost anatomical vulvas to inventive group sex. For being created during the 1950s they are far in advance of almost any other erotica of the time, offering their rare viewer a detailed manual of sex education, with women as well as men experiencing real pleasure. Both when they were created and now, they also demonstrate brilliant life drawing technique and well repay study for this alone, never mind the erotic stimulation they elicit. If you are an artist yourself, you might think about making Tom Poulton one of your inspirations.