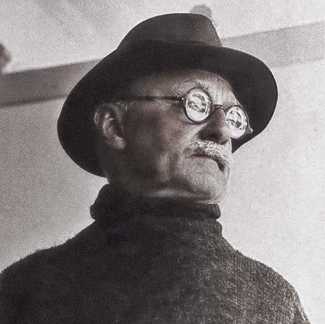 The French artist Albert Marquet was one of the Fauve painters, a lifelong friend of Henri Matisse. The Fauves (French for ‘wild beasts’) emphasised the use of bold brushwork and strong colours with a high degree of simplification and abstraction. After around 1910 he painted in a more naturalistic style, primarily landscapes, but also several portraits and, between 1910 and 1914, a number of female nude paintings. The late 1910s and 1920s also saw him concentrating on figure drawing, a portfolio of these, L’académie des dames, being published in 1950 after his death.

This interest in figure drawing coincides with an extended visit to Algiers in 1920, when Marquet was recovering from Spanish flu. There he met the young writer Marcelle Martinet, at first his guide and secretary, then his confidante and lover, and in February 1923 his wife. They travelled to Tunisia and rented a house in Sidi-bou-Saïd where they stayed for six months, briefly interrupted by trips to Tunis and one trip to France. Marcelle became very fond of the Tunisians and wrote about the village life, while Marquet painted and drew. This culminated in Marcelle’s book Images d’une petite ville arabe, an account of their stay illustrated with copper engravings derived from Marquet’s drawings.

Every winter the couple returned to Algeria, as Marquet knew his wife loved her country and he himself never lacked inspiration or subjects for his paintings there. In 1941 they bought a property near Algiers called Djenan Sidi Saïd. It had a garden of almost two acres and a spacious house. Marquet was forced to spend his days there until the end of World War II; he could not return to France because of his political points of view against the German regime.

In 1945, when the war was over, Marquet returned to France. The winter of 1946 he spent again in Algeria but in January 1947 he had to return to Paris, where he underwent an unsuccessful operation for bowel cancer. Marcelle outlived him by more than thirty years and became his biographer and custodian of his work.

Marcelle Marquet died in 1982, and many of the works of Albert’s that she had been looking after finally came to auction in 2010. This sale included over a hundred drawings, mostly made in the 1920s, of naked people enjoying sex with each other. Some had been included in the Académie des dames portfolio, which only included women and lesbian couples, but many were of heterosexual couples, and may well have been representative of the young married couple who were exploring their desires in the heat of north Africa.