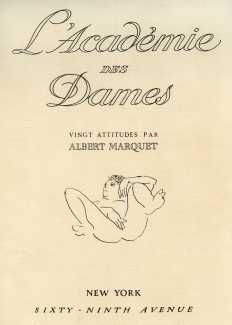 It is interesting to imagine why the publisher chose these particular drawings for a portfolio, and why Albert was interested enough in women-only sexual pleasure to have made so many drawings in the first place. He is known to have preferred working from life, so were these drawings made from personal observation?

Marquet’s choice of title is almost certainly a reference to Nicolas Chorier’s eighteenth-century novel of the same title, which includes many lesbian scenes; for more about Chorier’s novel see here.