Hérouard was born Chéri-Louis-Marie-Aime Haumé into a well-to-do family in Rocroi in the Ardennes district of France. His father died from a freak riding accident just days before his birth, and his mother remarried into the Hérouard family, from whom Chéri took his surname. His mother and stepfather thought Chéri was best suited for a career in the military, but their son had a very different idea – he wanted to be an artist. He submitted a portfolio of his work to the magazine Le Journal de la Jeunesse; the editor was so impressed by Hérouard’s draughtsmanship that he bought a selection of drawings, which were published in the magazine in 1902. Like most of his work, these drawings mixed fantasy and fetishism, and his distinctive style soon led to his being hired in 1907 as one of the main artists supplying work for the hugely popular magazine La Vie Parisienne.

The cover illustrations for the magazine were divided among several illustrators, with Hérouard contributing most frequently between 1916 and 1930. He continued his work with the magazine until 1952. The ever-popular society weekly featured risqué erotica alongside stories and features on art, theatre, film, literature and fashion, and Hérouard often provided illustrations for the short stories as well as cover images. As well as La Vie Parisienne, Hérouard also produced illustrations for other magazines including La Baïonnette, Fantasio, Le Journal de la Jeunesse, Mon Journal, Le Rire and Le Sourire.

Providing illustrations for La Vie Parisienne was more than enough to ensure Chéri Hérouard’s reputation as an artist, but his ability to draw provocative and sensuous semi-nude women had not escaped the growing number of publishers hungry to supply the Parisian market for illustrated erotica. 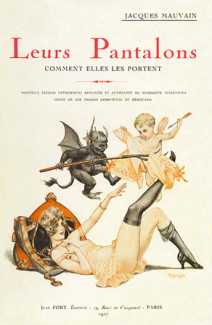 In 1927, for Jean Fort’s Au Cabinet du Livre, Hérouard had drawn illustrations for a very tame history of women’s underwear called Leurs pantalons; comment elles les portent (Their Knickers; How they Wear Them), and as a result the newly-formed Éditions Prima commissioned illustrations for Jean Martinet’s spanking novel Matée par le fouet (Mastered by the Whip). To keep his transgressive commissions separate from his mainstream work Hérouard took the pseudonym Herric, and nearly all the work shown here used that nom de plume. A string of commissions followed, with Éditions Prima and Jean Fort’s Aux Galants Passe-temps competing for his favours. During the thirties he must have been working at such a pace that it was hard to keep up with both strands of his work, and as a result there is an inevitable sameness about much of it; maybe there is a limit to the number of suggestive scenes that even the most talented artist’s imagination can conceive! At the same time, Hérouard’s erotic illustrations underline the fact that a growing interest in fetishism, S&M, role-play and gender fluidity existed long before it was deemed widely fashionable.