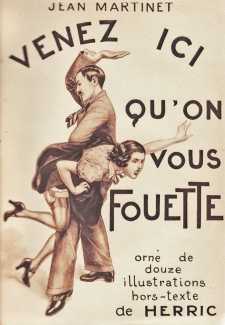 Venez ici, qu’on vous fouette! (Come Here, Let’s Whip You!) saw Hérouard returning for another Prima commission, and again to illustrate a text by ‘Jean Martinet’ a pseudonym used just twice, here and as the author of Matée par le fouet, also included in our portfolios. This may well be an oblique reference to the seventeenth-century soldier Jean Martinet, who was a lieutenant-colonel in the French army and one of the first great drill masters.

Venez ici was published in English in 1970 by the Satan Press as Conjugal Lash, translated by A. de Granamour.