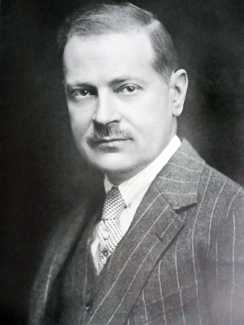 George Barbier is one of the defining artist-illustrators of Art Deco, the school of visual arts, architecture and design that took its name – an abbreviation for Arts Décoratifs – from the Exposition Internationale des Arts Décoratifs et Industriels Modernes (International Exhibition of Modern Decorative and Industrial Arts) held in Paris in 1925.

Born into a well-to-do family in Nantes in western France, Barbier studied at the Ecole Régionale du Dessin et des Beaux-Arts and made his entrance into the Nantes art world through the local Société des Amis des Arts, with early commissions from enthusiastic patrons such as Alphonse Lotz-Brissonneau. He mounted his first Paris exhibition in 1911, and was very soon receiving regular commissions for book illustrations, theatre and ballet costumes, and haute couture fashion illustrations.

He was part of a group of talented French artists nicknamed by Vogue magazine ‘Les chevaliers du bracelet’ (Knights of the Bracelet) for their dandyish attire, flamboyant mannerisms, and their common practice of sporting a bracelet. Barbier was described by Vogue as ‘un élégant jeune homme blond, tranquille et réservé’. He was one of many artists of the period who made much of their living from illustrating limited ‘editions de luxe’ books, with high standards of printing and a small monied clientele. Classics and contemporary works illustrated by the leading artists of the day, often lavishly bound, were eagerly collected. Societies of bibliophiles were founded in many cities and towns, ensuring that subscribers could be sure of obtaining the latest publications, numerous enough to warrant a lengthy column in the magazine L’amour de l’art each month devoted entirely to the subject. 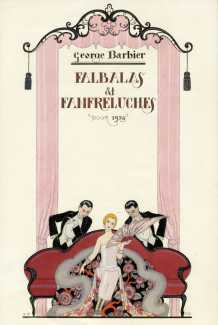 As well as the books illustrated by Barbier, he was the main contributor to two fashion periodicals, La guirlande des mois (The Garland of Months) and Falbalas et fanfreluches (Frills and Furbelows). Guirlande was published annually from 1917 to 1921, and Falbalas annually from 1923 to 1926, each elegant boxed volume containing coloured prints, an anthology of writings, a calendar, and blank pages for notes.

Barbier also turned his hand to jewellery, glass and wallpaper design, and wrote essays and many articles for the prestigious Gazette du bon ton. In the mid-1920s he worked with Erté (the pseudonym of Romain de Tirtoff) to design sets and costumes for the Folies Bergère, and achieved mainstream popularity through his regular appearances in L’illustration magazine.

Very little is known about Barbier’s personal life as only scanty documentation survives, but he was lifelong friends with similarly-minded friends including Pierre Louÿs and Jean Giraudoux. It is clear that he loved illustrating beautiful women, both in the latest fashions and wearing very little, and it is hard to believe that his interest was purely artistic. His illustrations for Louÿs’ Bilitis and Aphrodite are particularly sensual.

Sadly the last two years of his life were beset by illness, and he died in Paris at the height of his career. 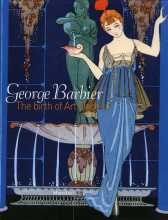 In late 2008 a major exhibition about George Barbier was held at the Museo Fortuny in Venice; the book which was published to accompany the exhibition is the best source for further information about Barbier, his world and his work. George Barbier: The Birth of Art Deco, edited by Barbara Martorelli, is published by Marsilio.