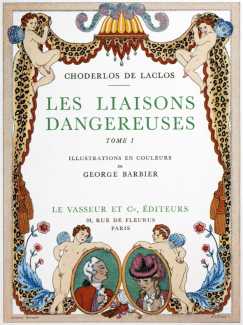 Les liaisons dangereuses, the famous French novel by Pierre Choderlos de Laclos first published in 1782, tells the story of the Marquise de Merteuil and the Vicomte de Valmont, two rivals and ex-lovers, who use seduction as a weapon to humiliate and degrade others, all the while enjoying their cruel games and boasting about their manipulative talents. It has been claimed to depict the decadence of the French aristocracy shortly before the French Revolution.

It is an epistolary novel, composed entirely of letters written by the characters to each other. The letters between Valmont and the Marquise drive the plot, with those of their victims and other characters serving to give the story background and depth. 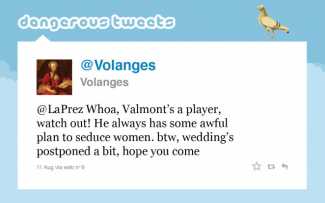 Les liaisons dangereuses has inspired many adaptations, especially for the stage, Christopher Hampton’s 1985 version being the best and the best-known. More recently a group of witty Francophiles has produced a wonderful online book, Dangerous Tweets, which captures perfectly both Laclos’ style and the way in which intimate communication about relationships has changed very little in two centuries – you will find Dangerous Tweets at the What the French! website.