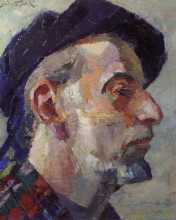 Jean Dulac was born and grew up in the small French town of Bourgoin, south-east of Lyon. His artistic skills were recognised early, and from 1915 to 1919 he studied at the École des Beaux-Arts in Lyon, where he excelled, especially in sculpture. First in Lyon, and from 1926 at Paul Landowski’s workshop in Paris, Dulac worked on many important sculpture commissions, including monuments to General Douglas Haig, Sun-Yat-Sen and Marshall Foch.

In 1927 he married Adrienne Riche, who regularly modelled for him, and their son Jean was born the following year. In 1932 the family moved permanently to Lyon, where Dulac set up his studio in Place d’Abondance, which would be his base until the mid-1960s. From there he continued to produce monumental sculptures, but also experimented with other media, from painting and drawing to fancy dress, medal design and book illustration.

Though he continued to produce sculptures and memorials, Jean Dulac’s emphasis from the mid-1930s onwards was on painting and illustration. He was a landscape painter in an original plein air style, was well known for his nudes, and in demand as a portraitist. He was also central to the artistic life of Lyon, rising to the presidency of the Société Lyonnaise des Beaux-Arts in 1946, a post he held until his death.

The pioneering forensic scientist Edmond Locard, a close friend of Dulac, wrote this of one of the artist’s exhibitions: ‘A nude drawn by Ingres evokes angelic beauty, but Jean Dulac’s vision is different. It represents abundant firm flesh which lives and breathes, where you can sense the heat of the blood and the power of the nerves, yet this hymn to beauty is complemented by the perfection of the line and the grace of the attitude. Grace and variety. Even when he draws the same model again and again, there is hardly any repetition. He knows how to draw diverse inspiration from his subject, his sensibility bringing out so much more than imitation. And the reason for this – before being a painter, he had been a sculptor.’

Adrienne Dulac died in 1943, and in 1944 Jean Dulac married the well-known Lyonnaise coutourier Lucienne Collaud. She became one of his favourite models, and he painted her many times; she died in 1954 after a long illness. Jean continued to paint, and in early 1965 opened, with his son Jean, his own gallery in Lyon; the opening exhibition featured twenty-five years of his work. He continued to paint, mostly nudes and landscapes, almost to the end of his life.

In his obituary of Jean Dulac, his journalist colleague André Mure wrote ‘What was admirable about Jean was not only his kindness, but also his modesty and humility. He was never the artist who paraded before his paintings as if he had given birth to immortal masterpieces. On the contrary, he was always devoured by anxiety, that anxiety which is precisely the characteristic of the true artist.’