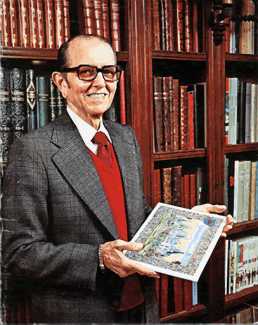 Jean Gradassi is one of those artists who develops a very particular style, then works on it to produce an abundance of similar, very accomplished but rather indistinguishable, portfolios which some collectors find irresistible and others completely over-the-top.

Born into a military family in Antibes on the French Mediterranean coast, his family moved regularly both in France and in French North Africa, which gave the young Jean an abiding interest in travel, history, and the variety of artistic styles he encountered, especially the miniaturist styles of Chinese and Indian art. His particular preoccupation was with the costumes, architecture and domestic arrangements of medieval and romantic French history, and all his work is infused with his researches into period detail.

His first commission, in 1947, was to illustrate Théophile Gautier’s Le Capitaine Fracasse, a popular seventeenth-century romance, but it was not until the 1950s that he perfected his trademark scenes animated by dozens of lively characters following a multiplicity of trades, crafts and activities.

The next thirty-five years saw Gradassi produce more than sixty illustrated editions, and because one edition could sometimes encompass several volumes (as with his Shakespeare or Rabelais for example) this meant over a hundred illustrated volumes.

Many of his illustrations, both those with one or two people and the lively crowd scenes, often include a great deal of naked flesh, but while they are undoubtedly accomplished and colourful, they veer more towards the comic than the artistic – which may be precisely their attraction.

A complete list of works illustrated by Jean Gradassi can be found here at his French Wikipédia entry.