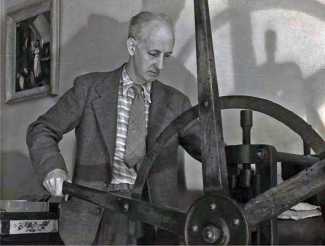 Immensely talented as illustrator and engraver John Buckland Wright was, the two qualities that uniquely qualify him for a place here are his antipodean love of the free, naked human body, and his consummate skill in drawing it. A third important quality – he liked sex.

He was fortunate that his family fortunes and world history put him in the right places at the right times. Born in New Zealand, the sad early death of his father led to the family moving to Europe, where John was educated in Switzerland and England. In 1924 a small legacy encouraged him to seek out the art world of Paris and Brussels, where his growing interest in wood and copper engraving found encouragement from clients including Alexandre Stols, director of the prestigious Halcyon Press.

In 1930, recently married to bilingual translator Mary Anderson, he settled in Paris and started working with Stanley William Hayter at Atelier 17; here he met and collaborated with many of the famous artists of the period, including Constantin Brancusi, Joan Miró, Pablo Picasso and Henri Matisse. By the mid-1930s he had produced woodcut engravings for nearly twenty books, which were already collector’s items.

John Buckland Wright was an inspiring teacher as well as a skilled artist-engraver; first at Camberwell School of Art in 1948, and from 1952 at the Slade School of Fine Art, he taught a new generation the finer points of engraving on wood and copper.

As far as sex is concerned, as well as having three children with Mary (Christopher, their oldest, lectures regularly on his father’s work), John was always drawing sketches of naked, often coupled, figures and passing them round his closest confidantes. In his personal 1968 memoir of John Buckland Wright, Anthony Reid tells of the time when, sharing a beer with John, the artist commented ‘This is the only brand of beer I like here, because it’s the only one that has a picture of a naked woman on the label’.