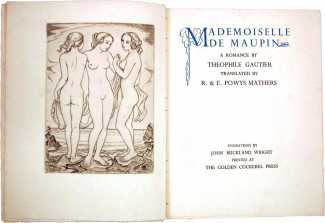 French romantic novelist Théophile Gautier’s 1835 semi-biographical Mademoiselle de Maupin is based on the life of the noted opera star Mlle Maupin, who was a first-rate swordswoman and often dressed as a man. Originally the story was to have been about the historical la Maupin, who set fire to a convent for the love of another woman, but Gautier instead turned the plot into a simple love triangle between a man, d’Albert, and his mistress, Rosette, both of whom fall in love with Madelaine de Maupin, who is disguised as a man named Théodore.

The novel, particularly popular in the 1930s, was a natural choice for Golden Cockerel, especially in the translation by sister and brother team Rosamond and Edward Powys Mathers, and Christopher Sandford inevitably chose John Buckland Wright as the illustrator.

The 1938 Golden Cockerel edition of Mademoiselle de Maupin was produced in a run of 500 copies, of which 50 were in de luxe white vellum bindings. At the purchasers’ requests John later produced addition pen and ink drawings for several of the copies.