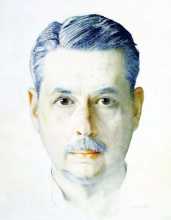 The younger son of Andrei Somov, one of the principal curators of painting at the Hermitage and a prominent collector himself, Konstantin Somov grew up and was educated at the Maia Gymnazium in St Petersburg. His formal education was enhanced by extensive travel in Italy, France, Germany and England. He was a versatile artist and designer, but his principal media were oil, watercolor, and gouache, and his main subjects portraits and landscapes. By the turn of the century he had become a regular and prominent participant in group exhibits both in Russia and Western Europe, and, after leaving Russia in 1923, in the United States.

Somov began to work as a graphic artist early in his career, first as a cover designer for publications such as Mir lskusstva (The World of Art, 1899–1904), Khudozhestvennye sokrovishcha Rossii (Artistic Treasures of Russia, 1901–7), and Zolotoe Runo (The Golden Fleece, 1906–9), and then as a design artist for illustrated editions of the works of Pushkin, Gogol, and the symbolist poets V.I. Ivanov and K.D. Balmont. His distinctive style was imitated by other artists in designs for hundreds of postcards, invitations, and programmes for some of the most important events of the theatrical and social seasons of St Petersburg. A meticulous craftsman, Somov worked long and intensively on each of his works, producing his illustrations using an elaborate, painstaking photomechanical process. 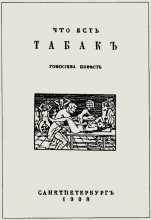