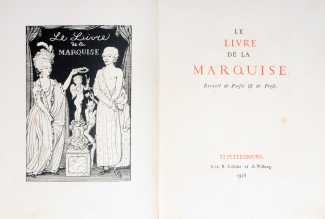 Somov’s second attempt to illustrate the collection was published in St Petersburg in French by Golike and Vilborg in 1918 as Le livre de la Marquise: recueil de poésie & de prose. According to the endnote, it was printed in a run of 800 copies. While this ‘small’ version was substantially larger than the German edition, including poetry as well as prose, it lacked many of the explicit plates and vignettes to be found in the so-called ‘large’ Marquise, published later in 1918.

The ‘large’ Marquise is also entitled Le livre de la Marquise: recueil de poésie & de prose and was produced in an edition of 800, but in order to circumvent Bolshevik censorship it bore the fanciful imprint ‘Venise, Chez Cazzo et Coglioni, 1918’. Many of its plates and vignettes are hand-coloured, and most are explicitly scatological and sexual.
While more than twenty full plates and vignettes are unique to the ‘large’ Marquise, a handful of images appear in all three versions illustrated by Somov, most often repeating themselves between the two French versions. In the ‘large’ version Somov essentially undresses the figures in his ‘small’ version, exposing genitalia and graphically illustrating his subjects’ sexual interaction.

Rather than show the three versions of Marquise separately, we have chosen to show the images from all three editions together to demonstrate the development of Somov’s subjects and imagination.

We would like to thank our Russian friend Alex for his assistance in sourcing the images for Marquise.