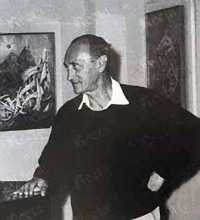 Mario Francesco Laboccetta was one of the most prolific and talented illustrators of the interwar art deco years in Paris, yet a combination of a retiring personality and unfortunate commercial circumstances have resulted in his work often being overlooked in favour of much better known contemporaries like Barbier, Brunelleschi, Dulac and Nielsen.

Laboccetta grew up in Naples, and studied at the Istituto Tecnico Commerciale where he developed his technical skills, but he also had a natural talent and love of drawing. After serving in the First World War he moved to Paris in 1924, where his ability to create fashion illustrations quickly found him a home in the popular magazine Paris Plaisirs.

His book-illustrating break came in 1930, when Editions d’Art Henri Piazza commissioned artwork for a series of titles, culminating in a richly-illustrated edition of Contes d’Hoffmann, with forty-one fantastic coloured illustrations. Editions Nilsson also recognised his talents, commissioning for a dozen or so titles including a sumptuous volume of Beaudelaire’s Fleurs du mal. Unfortunately, several sets of commissioned Laboccetta illustrations for Nilsson and Mondadori titles were never used as high-quality publishing suffered from the depression of the late 1930s.

In 1950, disillusioned by the world of commercial publishing, Mario Laboccetta ‘retired’ to the island of Capri, where he spent the rest of his life painting individual canvasses on the fantastical subjects that interested him, combining landscape and figures in his own inimitable style.